Today, dress codes are fluctuating and relaxing. Business smart is blurring lines with business casual, and country & tweeds are being worn to weddings, but there are some things that rarely change. Formal dress codes are one of them.

For some modern men, an invitation marked “black tie”, “white tie” or “morning dress” can be disconcerting. Formal dress events present us with a few unyielding codes and etiquettes, both explicit and implicit. Given the long traditions behind these codes, they’re there to be respected rather than experimented with.

However, negotiating the potential pitfalls of formal wear is easier than it seems. An experienced tailor will be able to talk you through each factor you need to consider, what you must wear, and where there is (or isn’t) room for manoeuvre with your look.

In the future, we’ll dig deeper and tell the history of these dress codes, as well as a much more detailed guide on the things to consider for each. In the meantime however, here’s a quick guide to men’s formal dress codes.

As the name Black Tie suggests, it is traditional (but no longer essential) to wear a dinner suit with a black silk bow tie. The outfit is completed with a formal dress shirt and a well-polished pair of formal shoes. Black Tie is traditionally worn at evening events (after 6pm. It’s a slightly less formal code than white tie & tails, but more formal than a standard suit.

With so many people dressed in the same attire, it’s easy to stand out for the wrong reasons. At Marc Oliver, we believe that a well-made dinner suit that fits properly, using a fine pure new wool (or a wool and silk blend) cloth represents a sound investment as it will keep you cooler and last for many years.

A dinner suit or jacket is often referred to as a DJ in the UK, or a Tuxedo in the US. It’s an evening suit distinguished principally by either satin or grosgrain (ribbed silk) facings on the jacket’s lapels and buttons. There is also a similar banding or stripe along the out seam of the trousers.

Dress suits are still predominantly black and occasionally midnight blue, and as dress codes have relaxed in recent years, people have been allowed a greater degree of flexibility in expressing their individualism when selecting fabrics and choice of accessories.

However, it is important to remember that Black Tie still remains the gold standard for formal attire, so we advise sticking to the rules as you will enjoy the occasion far more by obeying the subtle differences.

Morning suits are the equivalent of day time formal dress. They’re now mainly worn for weddings or at formal race days such as Royal Ascot, in the Royal Enclosure, or The Epsom Derby, in the Queen’s Stand.

They’re also still worn in the City of London at certain livery functions, however these are eclipsed by royal or formal government events which still retain them as traditional dress.

Indeed, morning suits are still worn as the uniform of choice at leading private schools such as Eton College and Harrow.

Traditionally, morning coats are made from a black herringbone cloth and worn with a dove grey vest and striped trousers. Men often wear a popular variant where the morning coat, vest, and trousers are all made using the same grey material. However this is only appropriate for wedding and race days, where it’s known as racing grey.

Although morning dress rules limit certain aspects of individualism, you can still choose from a wide range of fabrics and waistcoat designs to add the personal finishing touch.

Also known as “Evening Tails”, this is the most formal evening dress code for men. Unlike other forms of formal wear, this code is stricter and leaves no room for variation.

It consists of a black tailcoat worn over a white starched shirt, marcella waistcoat, and the eponymous white bow tie. This bow tie is traditionally worn with a detachable collar, however these days there is an increasing trend in wearing one-piece shirts.

The tail jacket will have satin or grosgrain (ribbed silk) facings on the jacket’s lapels and buttons, and a similar banding or stripe along the out seam of the trousers. Finally, the outfit is completed by a nice pair of patent leather shoes.

At Marc Oliver, we’ve been dressing people for formal events for years. We’re not only experts on cutting supremely fitted, comfortable formal attire — we’re also well versed in educating our clients on the do’s and don’ts of formal dress.

Make an appointment with us, and enjoy the experience. 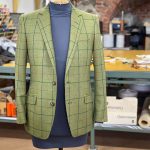