As a company on a mission to be “the antidote to traditional high street estate agencies”, Story of Home and Marc Oliver share a lot of the same values. The London property-tech, creative-driven startup deals in real estate in some of the city’s most prestigious boroughs – Camden, Primrose Hill, Marylebone, Knightsbridge, Regent’s Park, where they take the time to – as the name suggests – tell the full story, go into the beautiful details, and use only the highest quality imagery in its listings.

Story of Home recently asked our Founder and Lead Tailor Jamie Henfrey to show them around Savile Row, the Mayfair enclave he’s known like the back of his hand for the last three decades, and let them in on what he loves most about his work.

This story first appeared on Story of Home. Feel free to read the original version here, and check out their fabulous website.

Jamie Henfrey loves his job. He is all about the special relationship between client and tailor, who should be a friend, confidant and, when necessary, the giver of honest opinion. He is as engaging to talk to as he is excited about the materials he works with and the clients he dresses.

“Good clothing is like coming home from winter’s walk and having a warm crumpet. It’s a great feeling. If I put you in a wonderful jumper, a lovely suit, or a nice cashmere coat, it’s a very personal thing that surrounds your whole body. It feels special. You feel a bit stronger. I liken it to armour. It gives you the confidence to walk into a room.”

When the first Earl of Burlington bought a mansion on Piccadilly (Burlington House, now home of the Royal Academy) he also bought up the surrounding land, and his descendants made sure the area developed into precisely the sort of neighbourhood they wanted to live in.

High quality eighteenth-and nineteenth-century brick town houses went up, lived in by aristocrats and well-to-do professionals. Savile Row became the street where noblemen went to get kitted out and became the centre of London’s bespoke tailoring scene.

“Savile Row has always been a changing environment with new people and new ideas,” says Jamie. “As long as that continues, we’re constantly evolving. I’m one of those people who came in with new ideas.”

The Row maintains its reputation for tradition while simultaneously embracing change. In the 1960s, Tommy Nutter introduced the styles of Swinging London at the same time that Apple, the Beatles’s management company, moved in at number 3. Today, the contemporary and the classic cohabit the street.

“I started on a salary of £5,100,” Jamie says. “The boss said to me, ‘Take the job because this is going to be the best training you’ll ever have.’ I worked with people that fitted Frank Sinatra and the Rat Pack. I measured people like Henry Kissinger when I was a boy, I thought ‘this is amazing!’ There were film icons like Michael Caine here every day.”

“Savile Row is still revered. Globally, it’s still the powerhouse. But I have always made a point of not being exclusively on Savile Row, because I wanted some separation and the fun of other experiences.” Being a tailor not constrained by tradition has allowed Jamie to take his craft on to many different stages, including TV and also what he describes as the “inspirational experience” of working with Team GB at the 2004 Olympics.

“I fell in love with Italy early on,” Jamie explains. “In English tailoring at the time, there was a degree of snobbery which I always disliked. There were silly little mantras here like never wear brown shoes with a blue suit. I thought, Italians do that all the time and I’ve never seen a badly dressed Italian.”

Milan allowed Jamie the freedom to work classically, but also bring in modern elements because the Italians wanted clothing more relevant to their modern lives. He brought this ethos back to London because although Milan taught Jamie he could work exactly how he wanted to, he insists he would never swap London for Milan.

“London is one of the greatest cities in the world, just lacking a bit of sun. But our weather allows an English tailor to make fine Scottish tweeds, beautiful cashmere overcoats, fine linen summer suits. You get far more fun with the four seasons of London than you do working with somewhere which is always warm.”

Jamie describes Mayfair as “a wonderful playground for people.” And he’s right of course. There’s nowhere else quite like it. It is one of the most sought after locations in the world, with some of the largest houses in central London and many of the most outstanding apartments. It is also home to some of the capital’s most famous hotels and finest spas and is renowned for its contemporary and classical art galleries, not to mention public collections, including the Royal Academy of Arts.

Jamie is a man who thrives on energy and loves people, so Mayfair’s boutique shops, cafes, bars, gorgeous streets and parks are a perfect setting for him. “I love all the fun stuff here but it’s beauty too, with places like Mount Street and its jaw-droppingly gorgeous pink buildings. Absolutely stunning. Mayfair is limitless.”

When Jamie arrived in London as a boy, he lived close to Hampstead Heath. “The ponds were fantastic. Hampstead High Street and all the green spaces made it a special place for me.” In the late-80s he moved to the back of Bayswater and he fell in love with the Portobello Road, spending most of his weekends there and in Hyde Park.

“My dad was an extremely charismatic person. I learned from him that it’s better to have a little of something expensive and nice, rather than a lot of something cheap. He also instilled in me the belief that you can do anything in life as long as you have a degree of why not? Why not me? That’s why Marc Oliver exists today. That’s why I’m lucky enough to have the best job in the world in this amazing city.”

“Imagine you’ve bought a present for your partner and you know they are going to absolutely love it,” he says, “and you’ve kept it a secret. That feeling of expectation about giving it to them and knowing how happy they are going to be, and then that feeling of watching them see it for the first time and how ecstatic they are about it. That’s what I feel every time I put someone into a piece of clothing I’ve made for them. I love it.” 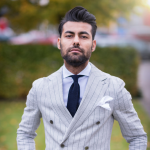 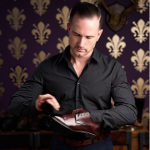